Last night, our Tampa Bay Lightning beat the Columbus Blue Jackets 2-1 for a character win that handed the Jackets their fourth straight loss. It kept our boys in blue within sniffing distance of a wild card spot, but it also featured one heck of a hay maker delivered by the Bolts’ no. 24, Ryan Callahan.

The altercation with the Blue Jackets’ Scott Hartnell happened in the final seconds of a scoreless first period, and while some lament the existence of quality fisticuffs in hockey, the traditionalist in you has to appreciate the swift kiss on the chin from our 30-year-old alternate captain.

Have a look at that bad boy above, and grab a ticket to see the guys when they return to Amalie Arena on Sunday to face the Ottawa Senators. Puck drop is at 5 p.m. 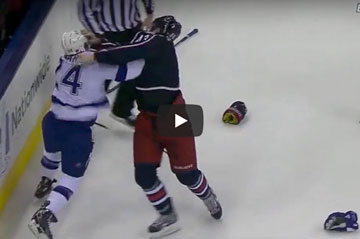 SEE US ON FORBES